Malaysian Families Flocking to Sunway Pyramid to Meet Ejen Ali at Boost’s Pop-up to Win Over RM50,000 Worth of Rewards

Hosted at Sunway Pyramid, shoppers have been flocking the shopping mall to get their share of the exclusive rewards offered, that’s worth more than RM50,000

Hosted at Sunway Pyramid, shoppers have been flocking the shopping mall to get their share of the exclusive rewards offered, that’s worth more than RM50,000 in total across the mall*. To participate, Boost users simply have to get their chance to play the Tikam & Win game as well as the Pick & Win lucky draw by spending a minimum of RM20 at any of the over 150 ‘Boost-ed’ merchants at Sunway Pyramid, including McDonald’s, KFC, Sephora, Mr. D.I.Y., and more*. Then, show their digital receipt at the pop-up to claim their prize*. 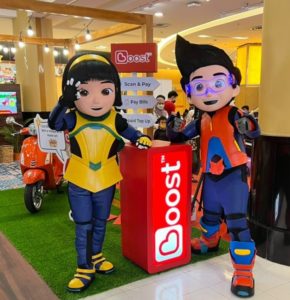 That’s not all, shoppers that pay using their Boost app at the mall will get to enjoy up to RM40 cashback with a minimum spend of RM60 during the pop-up event*. For those that didn’t get to meet with Ejen Ali and complete their Boost missions at Sunway Pyramid last weekend, do not miss your last chance to win big and save big this coming weekend when the Boost and Ejen Ali pop-up will return once more at 12PM, 3PM, and 6PM.

The collaboration between Boost and Ejen Ali is part of Boost’s nationwide ‘KebangkiTEN Raya’ campaign which runs from 18 April to 31 May. Throughout the ‘KebangkiTEN Raya’ campaign period, Boost users can look forward to attractive rewards and additional savings, including over RM100 cashback, a chance to win an all-new Vespa and Perodua Ativa to balik kampung, up to 10x Boost Stars, and an additional RM10 eDuit Raya for those receiving Duit Raya via DuitNow on the Boost app*.

To watch the full ‘KebangkiTEN Raya 10 Budak Merah dan Ejen Ali’ video and be up to date with the latest offers, please subscribe to Boost’s YouTube channel: https://bit.ly/BoostRayaxEjenAli

The Secret to Never Missing Your Bill Payments...

Calling All Boost Merchants: Ready to be Rewarded...

To encourage more merchants to embrace the cashless way of doing business, Boost Biz is...

As Malaysia enters its transitional phase towards an endemic status, about 800 local bazaar merchants...