Digital lifestyles can be rewarding thanks to BoostUP by Boost 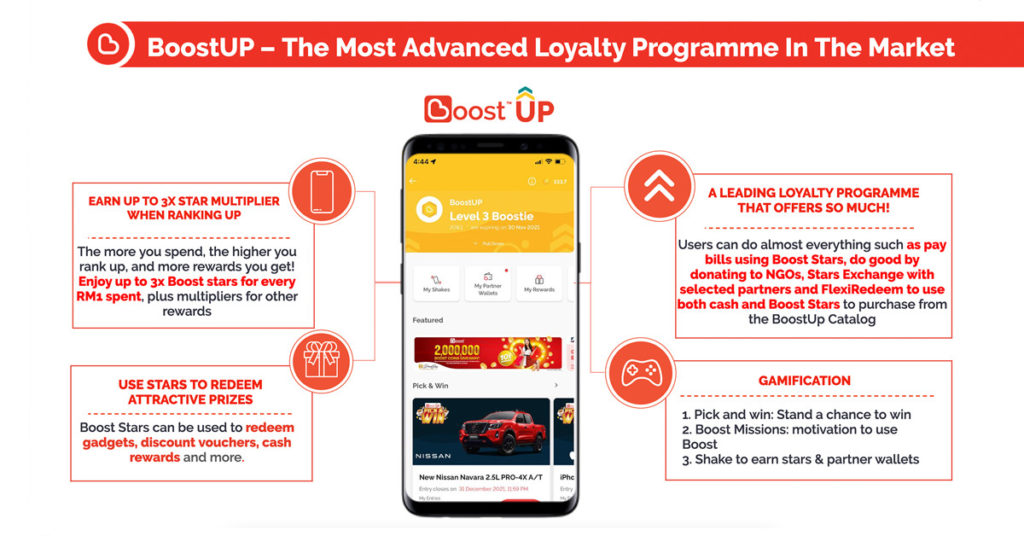 As the pandemic accelerated the digital shift that allowed us to access our daily and lifestyle needs with a few taps of our fingertips, Boost, the fintech arm of Axiata managed to shine and make their customers’ experiences more rewarding on the Boost app thanks to their BoostUP unique loyalty program that netted them the Fintech – Financial Technology win at the Malaysia Technology Excellence Awards 2022.

The awards programme recognises innovators and their work in the tech field of Malaysia. Recognizing that Malaysians adjusted to thriftier spending behaviours during the pandemic, Boost saw an opportunity to not only innovate the existing loyalty landscape      but to also reinvest in their customers. This led to Boost revamping BoostUP into a more holistic, inclusive, and interoperable loyalty ecosystem that delivered an elevated and fully digital loyalty experience to make the digital lifestyle shift more exciting.

BoostUP one-ups the competition, distinguishing themselves from other eWallets in the market, firstly, by creating a functional loyalty currency (Boost Stars) that offered intrinsic value to their value-driven users. And secondly, by introducing unique loyalty propositions, such as their Pick & Win, Redemption Catalogue, and Stars Exchange.

Pick & Win is a gamified “lucky draw” where users can invest their Boost Stars for a chance to win lifestyle rewards like cars, premium gadgets, and household appliances. Whilst the Redemption Catalogue offers users the option to exchange their accumulated Boost Stars for one of over 1000 different items in the catalogue.

Interoperability for BoostUP comes in with their Stars Exchange feature, which allows their users to exchange loyalty points from other partners’ platforms into Boost Stars. The Stars Exchange feature was created alongside partners such as Rakuten Trade and four banks, who sought to offer their customers more usability of points earned on their respective platforms.

The BoostUP revamp also included engineering a transparent, simple and consistent earn structure as well as an easier tier-up system from 5 to 3, where users can move between tiers relatively quicker thanks to a lower minimum 3-month required spending to tier-up.

All these features added and upgrades in the revamp have paid off for Boost as the numbers show growth in terms of user satisfaction and transaction values. They saw an uptick of 21% in terms of Gross Transaction Value (GTV) per user, a 43% increase in the number of users putting their Boost Stars into Pick & Win or redeeming from the catalogue, and a 100% increase in redemption earn rates per customer. To date, over 600 million Boost Stars are issued in the app per month, owing to the attractive rewards added and the structuring of earning and redeeming.

Boost Stars can also be used as a viable form of currency in place of cash, with the feature available for all tier users. A premium tier is also planned with exclusive benefits, making using BoostUP more enticing and rewarding for their loyal users.

The Secret to Never Missing Your Bill Payments...

Calling All Boost Merchants: Ready to be Rewarded...

To encourage more merchants to embrace the cashless way of doing business, Boost Biz is...

As Malaysia enters its transitional phase towards an endemic status, about 800 local bazaar merchants...