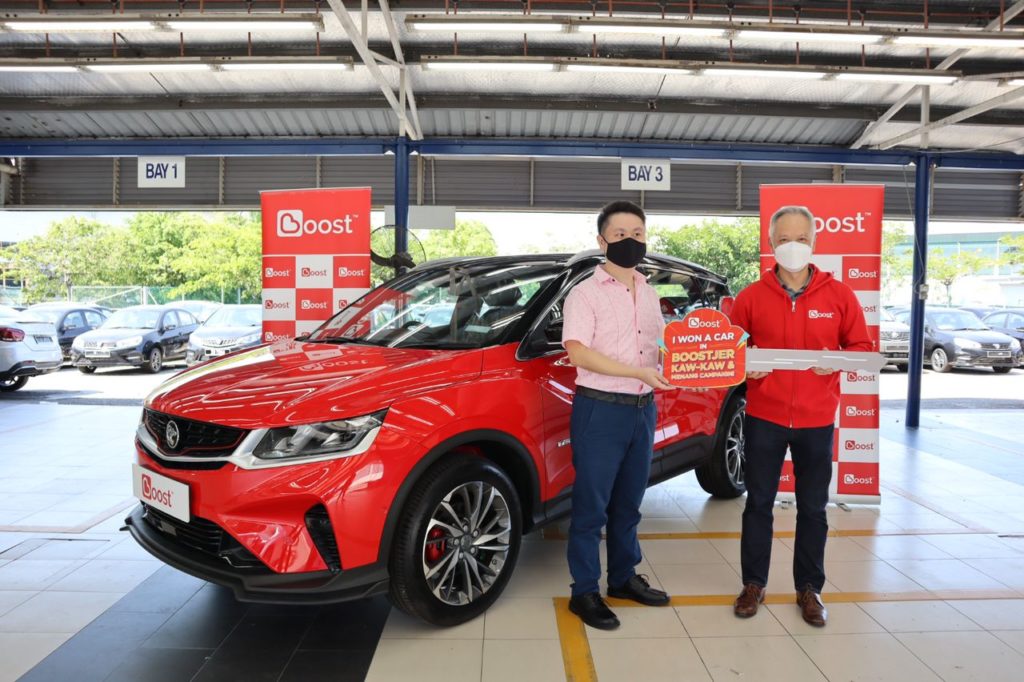 Two lucky merchants walked away with the Proton X50, as a reward for their cashless efforts from Boost.

Earlier this year, Boost launched its exciting merchant incentive campaign ‘Boost Jer Kaw Kaw and Menang!’ to further reward merchants going cashless and to drive local support. The Grand Prize was an all-new Proton X50, where all the merchants needed to do was encourage customers to go cashless and pay with Boost for their chance to win the car. Two lucky merchants walked away with the Proton X50, as a reward for their cashless efforts from Boost.

Eric Chong, CEO of Boost Biz presented the key to the first winner, Soo Kian Boon, a 41-year-old food and beverage merchant of Anytime in Selangor. Soo was ecstatic that he won the car. The proud Boost merchant of 3 years said it was really easy to convince customers to pay with Boost, as they were very supportive to help him win the Proton X50.

Soo shared the boons of his business which he received since going cashless. “It’s easy, fast and secure. No long queues to the bank. No need for holding on to a bulk of cash as payments go through in just one tap. It’s really as simple as that,” he said.

He further added that as long as one is open to change, they can easily grow their business. “Despite living in challenging times, I believe when God closes one door, he’ll open another. So, it’s time for us to get out of our comfort zone and take it as a challenge to start diversifying our business.”

The second winner was Lau Siew Whye, a 58-year-old General Manager of Farley Supermarket in Bintulu, Sarawak. Lau said he was overwhelmed and in disbelief that he got to head home in a new ride. According to him, he felt like he didn’t need to do much to get his customers to pay with Boost for this contest.

“We have been using Boost since July 2019. And luckily for us, we only had to provide our services as usual. Our customers were already religiously paying with Boost in our outlet,” he said.

Lau is glad that his business is now cashless versus the old days where he had to collect physical cash. He explained that Boost credits the earnings directly to their bank and has made running his business significantly easier.

“People come to my store and drive home with new groceries. But I never once thought that I was able to drive home in a new car for coming to my own store,” he added

‘Boost Jer Kaw Kaw & Menang!’ is one of Boost’s many campaigns to encourage Malaysians across the country to stimulate the economy by safely supporting local businesses while practicing safe and contactless transactions.

The new ‘Boost Makan’ is a versatile and easy to use food ordering platform integrated...